On my trip to Cuba, this is what I was most looking forward to – hiking and camping in the Topes de Collantes region. I was in the area for two days and the hiking on the 2nd day was supposed to be the hardest. That was until I drank a litre of rum with a Cuban and Argentinian couple in Trinidad the night before, see here. Oh and it was 32 degrees on the hike on the first day. And uphill. Oops!

I would be staying in a basic hacienda tonight, Hacienda Guanayara. Luckily the hike to the hacienda was only 8KM long and for some reason I enjoy hiking when its really hot. Probably a side effect of growing up in Ireland where the rain just gets warmer in the summer! 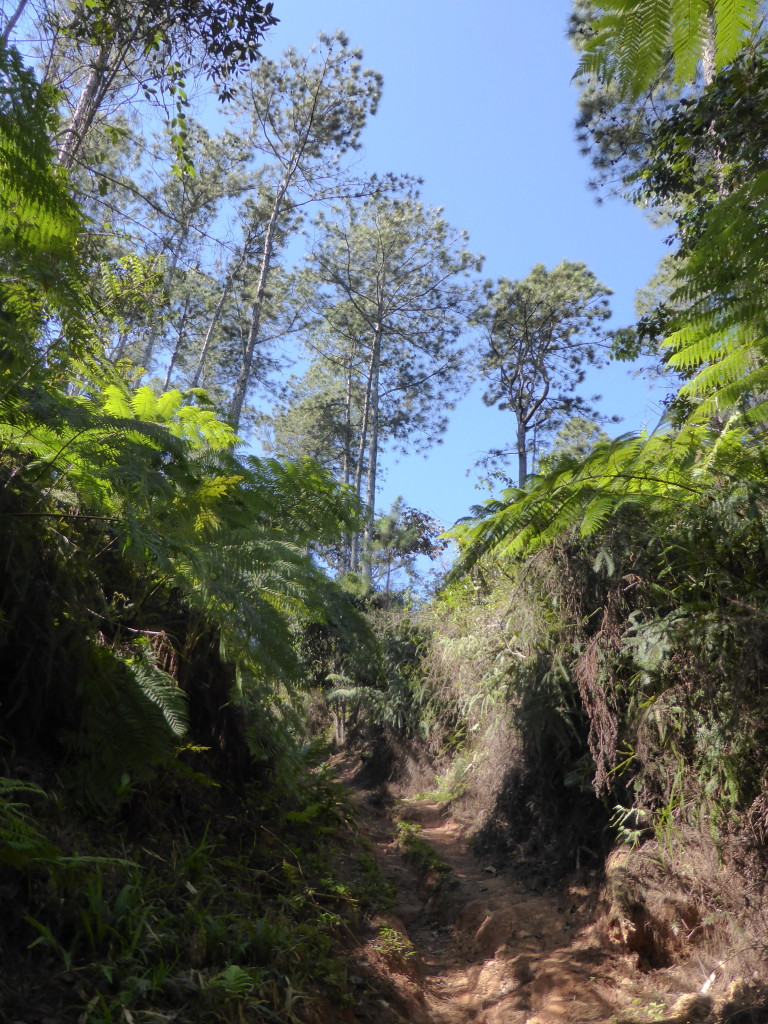 Uphill hike – I can do this!

After two hours of uphill walking, I will admit I was struggling. Ok, I was dying. I had drank most of my water and there were no streams to refill. I had no option but to keep going. When I eventually made it to the top this is what I saw: 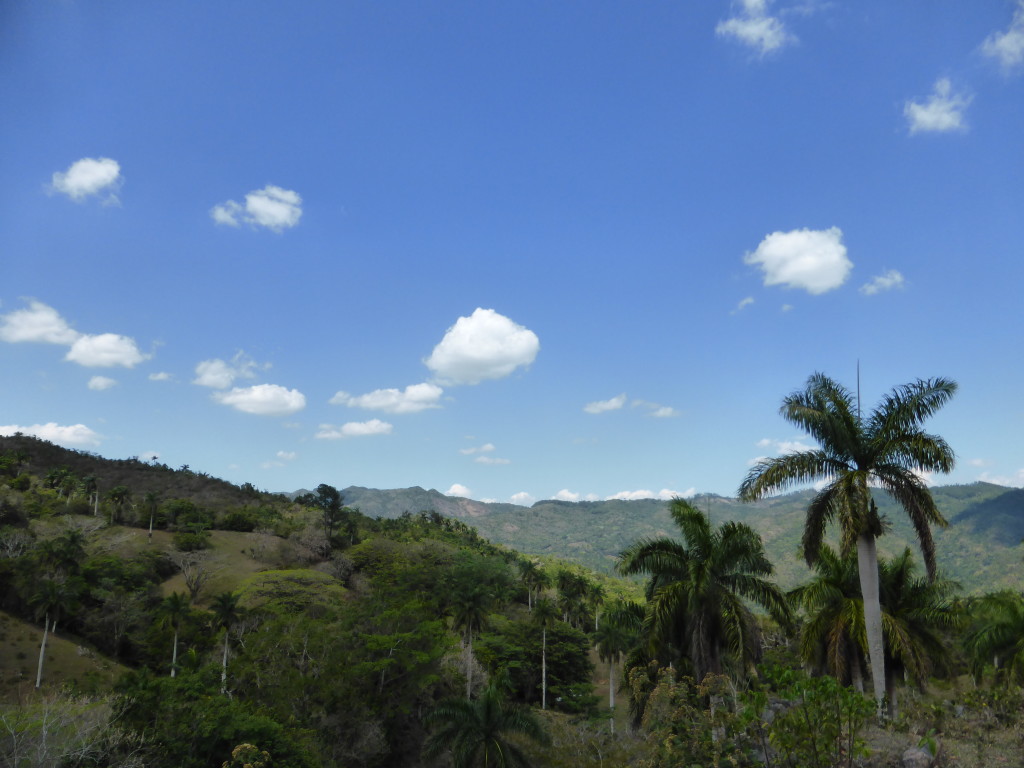 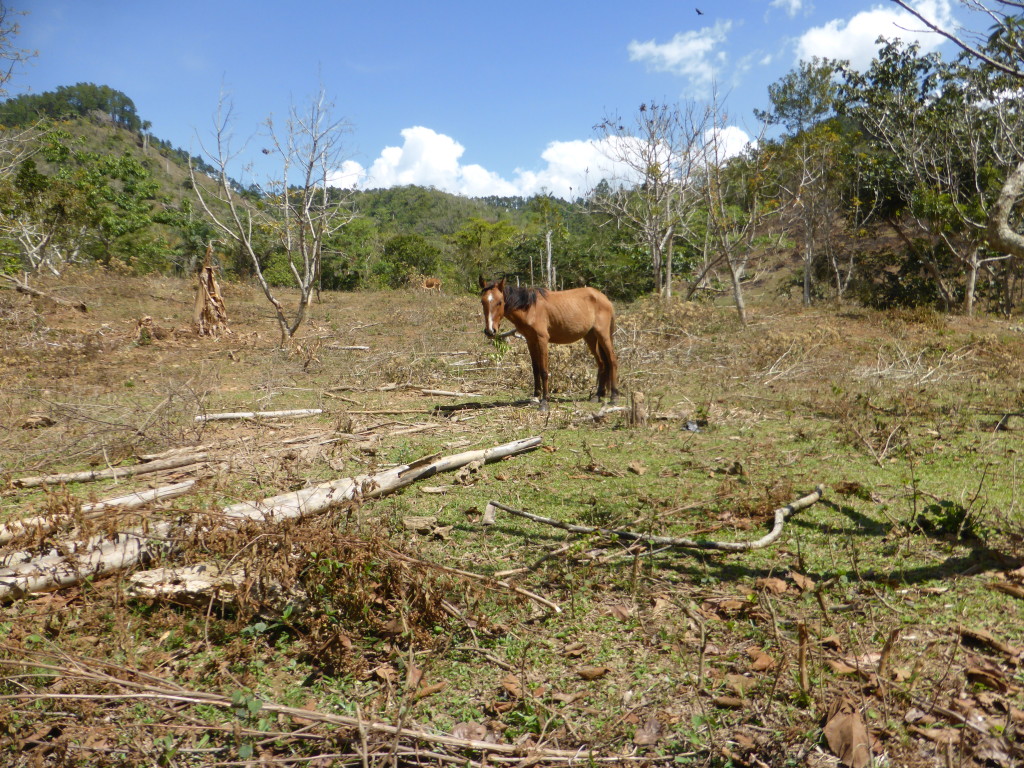 One of the many animals I saw on the hike 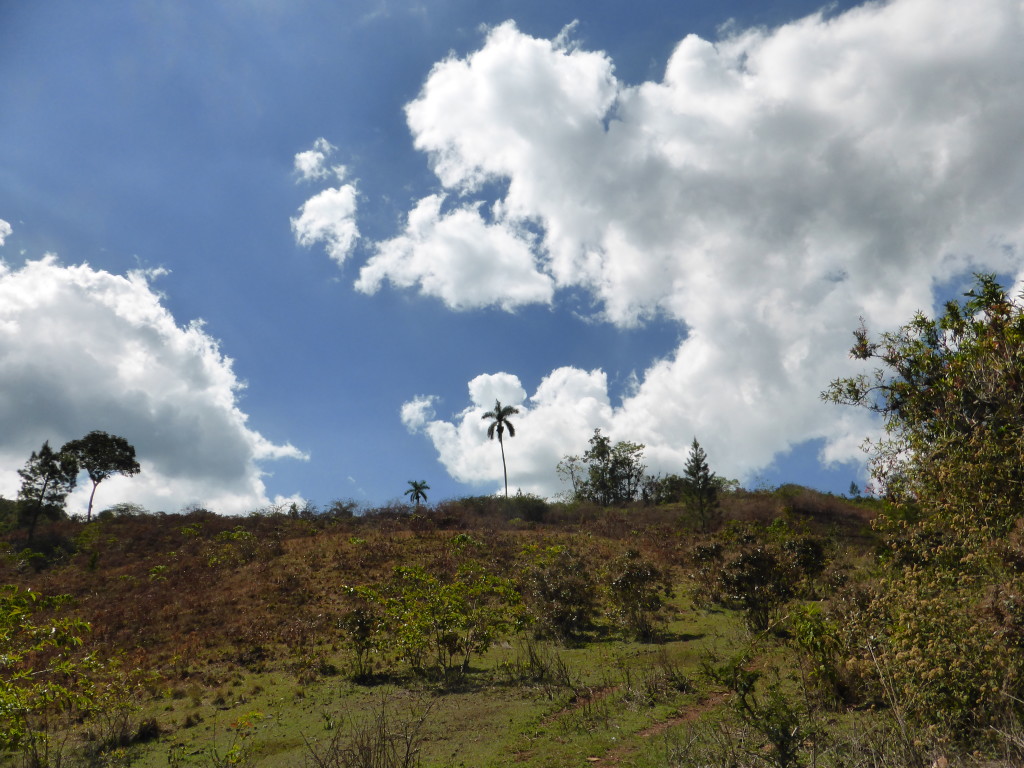 The bluest sky I’ve ever seen 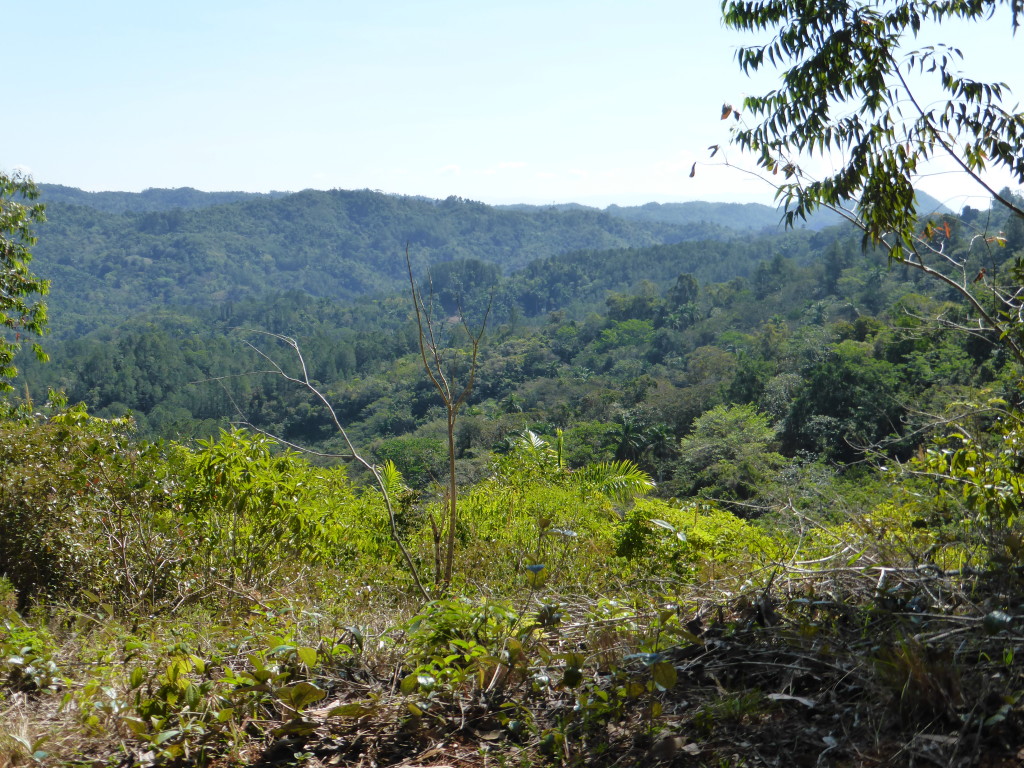 I would have no problem getting lost here 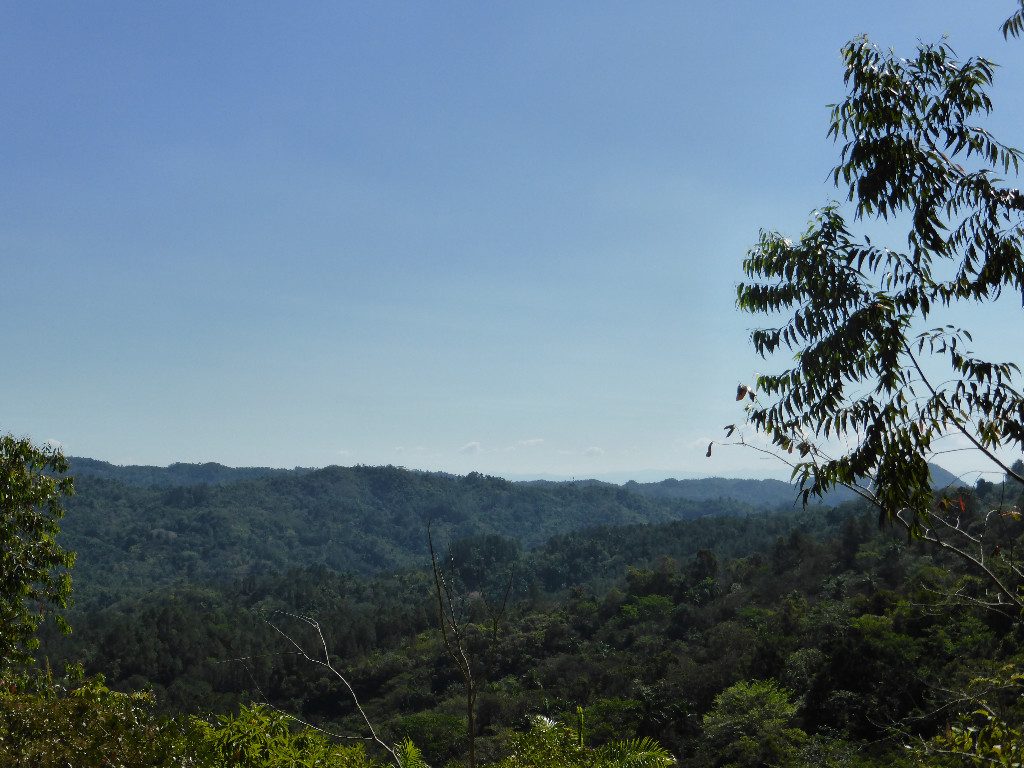 So green! It’s just like Ireland but without the rain!

Suddenly, I didn’t care how tired or dehydrated I was feeling. I normally love hiking in hot places and I was now in my element again and caught my second wind. I was almost jogging on the next stretch. Fortunately for me the next stretch was mostly downhill and on more solid surfaces so I made it to Hacienda Guanayara in no time at all. On arrival there was some much needed shade, lunch and an ice cold drink made Cuban style i.e. more rum than anything else. Oh well, my blood-rum levels were dipping a bit so why not!? 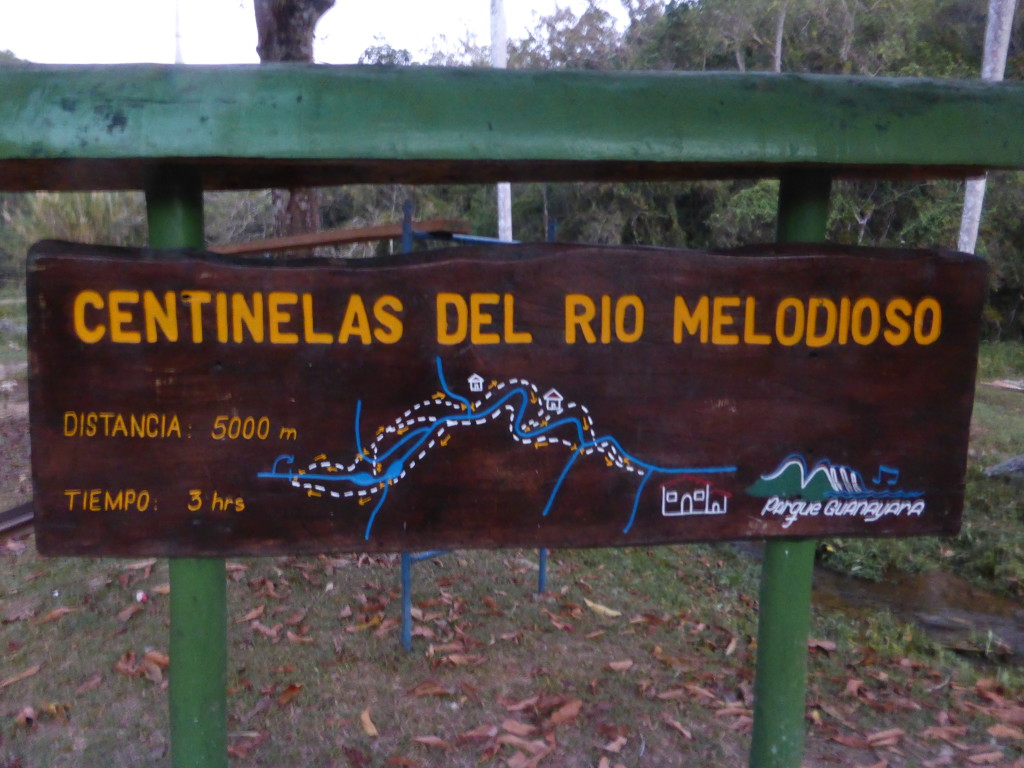 Another 5K of walking to go….

After lunch I set out on a more gentle walk in the area around the hacienda, this time of 5 kilometres. It was mostly flat but in early to mid afternoon with very little shade, it was really hot and very humid too. Fortunately for me, I had been able to down what felt like several litres of water at lunch so it was bearable. I quickly reached the furthest point of the walk – the Salto de Rocio waterfall.

The waterfall itself has a small pool area which people were taking a swim in to cool down. I had to abstain as, embarrassingly, I am unable to swim . Hopefully one day! I did at least approach the waterfall and get to enjoy the cooling mist. 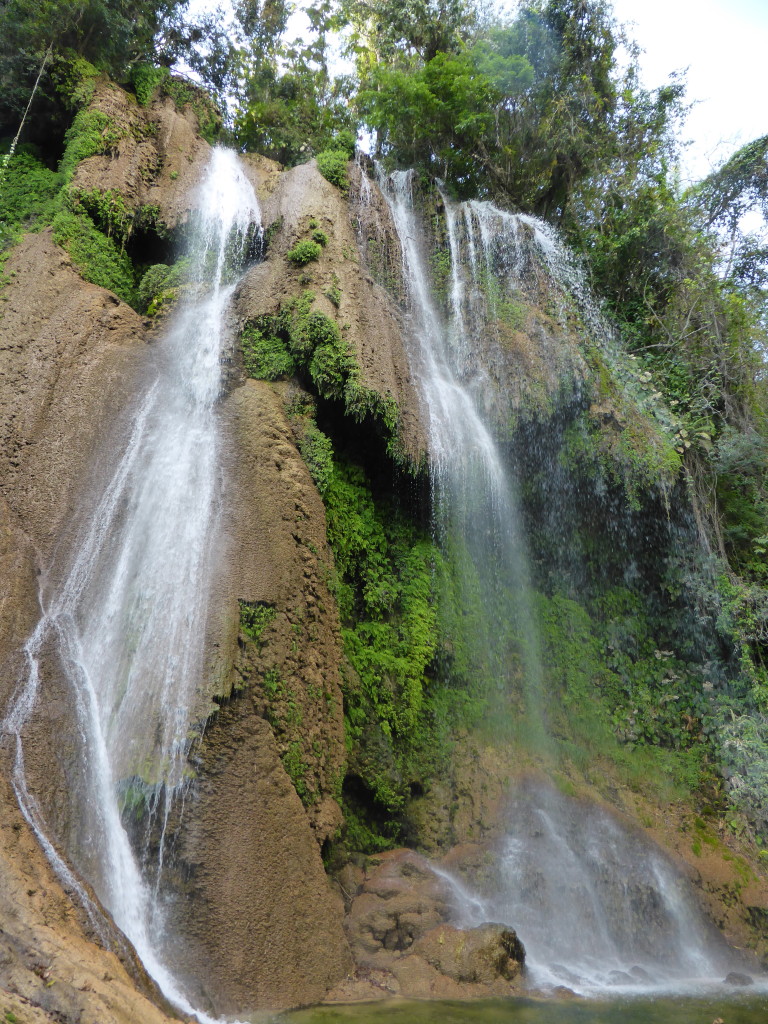 Having made it back to the hacienda and setting up my bed for the night i.e. a thin mat, I decided I was too lazy to unpack my sleeping bag. I made it until 2am before the coldness of the mountains got too much for me and had to unpack it. Once inside, I was toasty warm and drifted off for a nice long sleep. Or so I thought!

What I wasn’t aware of was that the hacienda had a lot of roosters roaming freely and come 4am, they had decided that I had slept for long enough and I needed to wake up.

I have never heard roosters like this in my life. I would swear they were right beside me. I didn’t mind too much though as I woke up to just about see the sun coming through the trees from the distance. How could I be upset at the roosters for being able to see this sight? 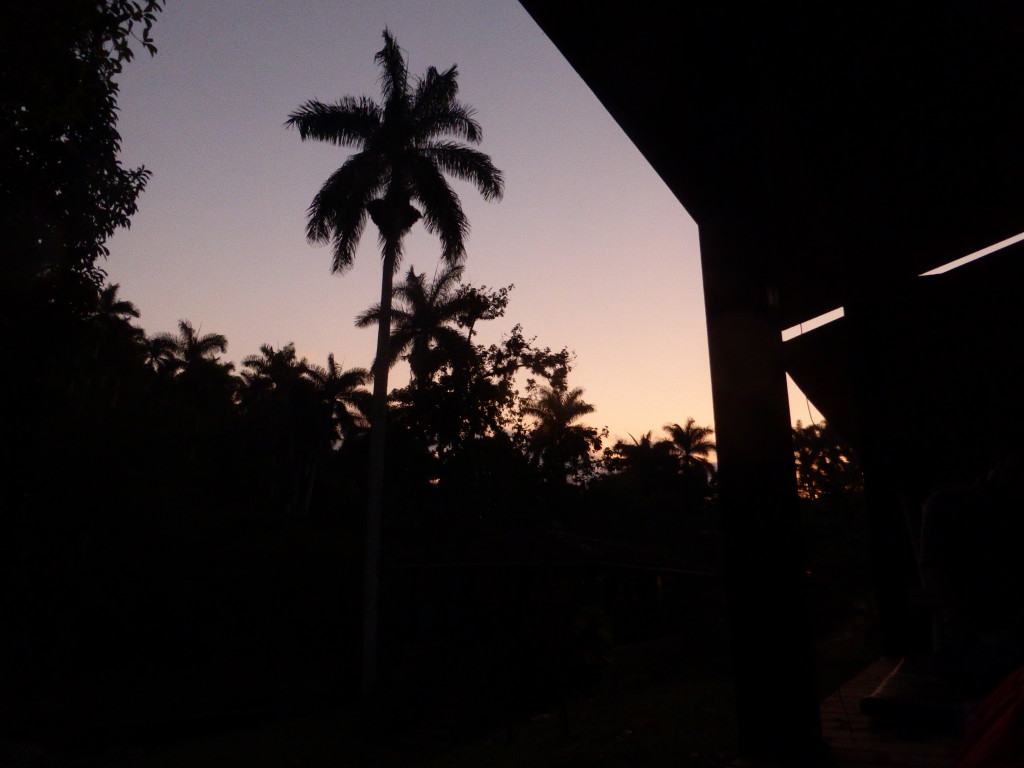 Day 2 in Topes and another hike. This one was supposed to be harder than yesterdays. Most of this hike was uphill through forested area but I was actually much better today. Maybe it was the lack of rum now flowing around in my system or the shade provided by the trees, but I found this much easier than yesterday.

In no time at all, I had reached the first stopping point – a pond/cave filled with crayfish called “La Batata”. To enter the cave you could either dive in and swim but being in hiking mode, I took the option of the rope chained to the wall and pulling myself across.

Eventually I reached as far as I dared to go with my camera for fear of killing it, especially as I still had over a week to go in Cuba and no way to fix it. I was able to drag myself over the rocks to the other side where there was a smaller pool and a little stream heading out. Sadly the water was too deep for me and I couldn’t go any further so I reluctantly had to retreat. 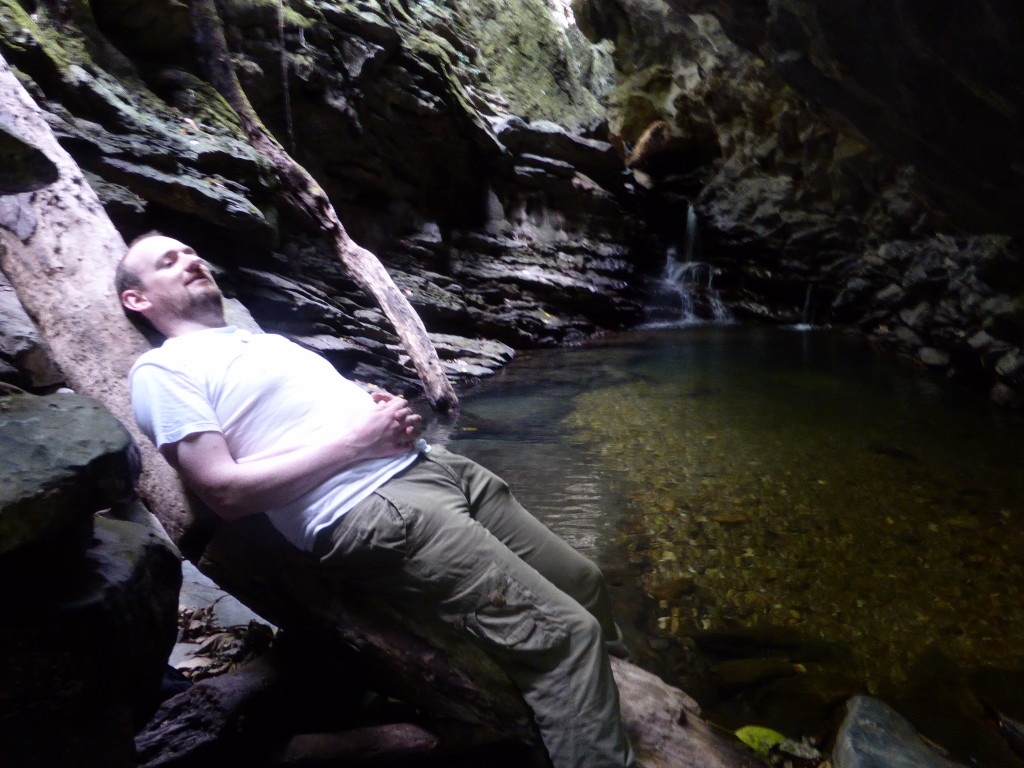 Shortly after leaving the cave, I arrived at the 2nd hacienda ‘Codina’ for a brief break before continuing on a walk in the area surrounding it. This walk was mostly over green grass, with orchids, trees, very tall bamboo trees creaking and almost sounding like they were ready to fall over. At one point, I was lucky enough to be able to spot the national bird of Cuba, the Trogon and it sat still long enough for me to take a couple of up close snaps. What a beautiful bird it is! 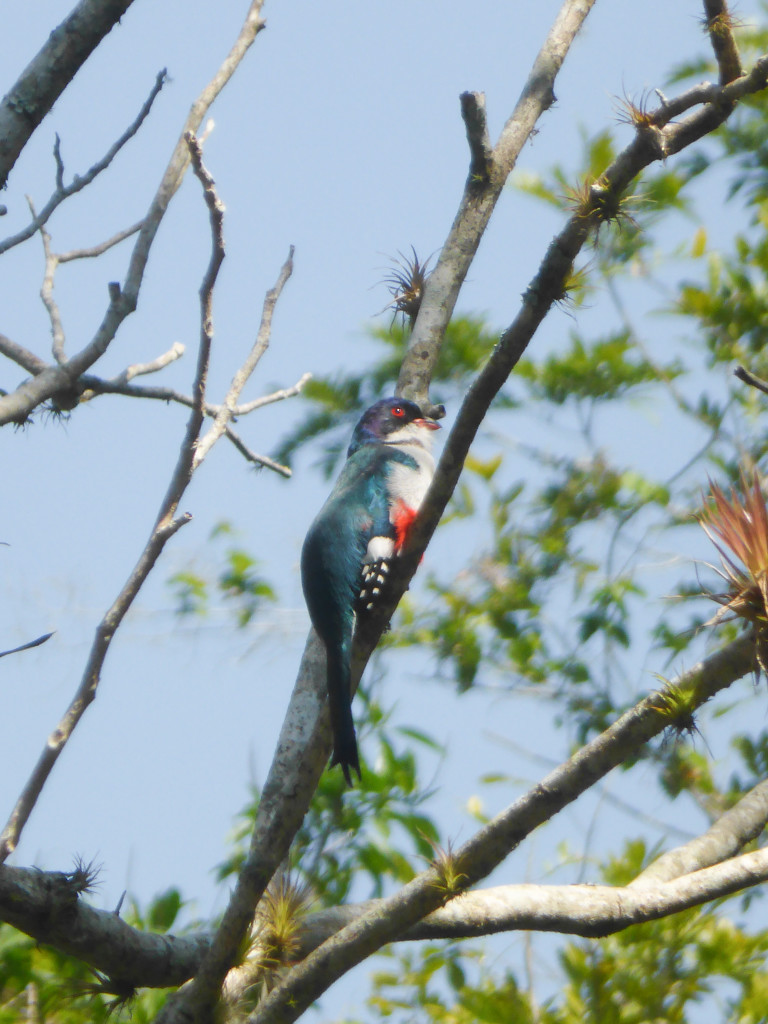 After some more walking through a cave, I came to a sort of watch tower / viewing platform which could be climbed. The views towards the Carribean were so stunning here that I came back again that evening and the following morning to do some thinking.

The view from here is possible my favourite that I have ever seen. Words just don’t do it justice! Click on the picture below to see the full version!

Amazing view towards the Caribbean sea

After leaving the amazing view behind and heading in the direction of the hacienda, I could detect a smokey smell in the air. After crossing a small stream and turning a corner, I found the source of the smoke……….dinner! I cannot tell you how amazing the smells were from the pig being roasted with orange juices poured over the top. If I wasnt hungry before I certinly was now 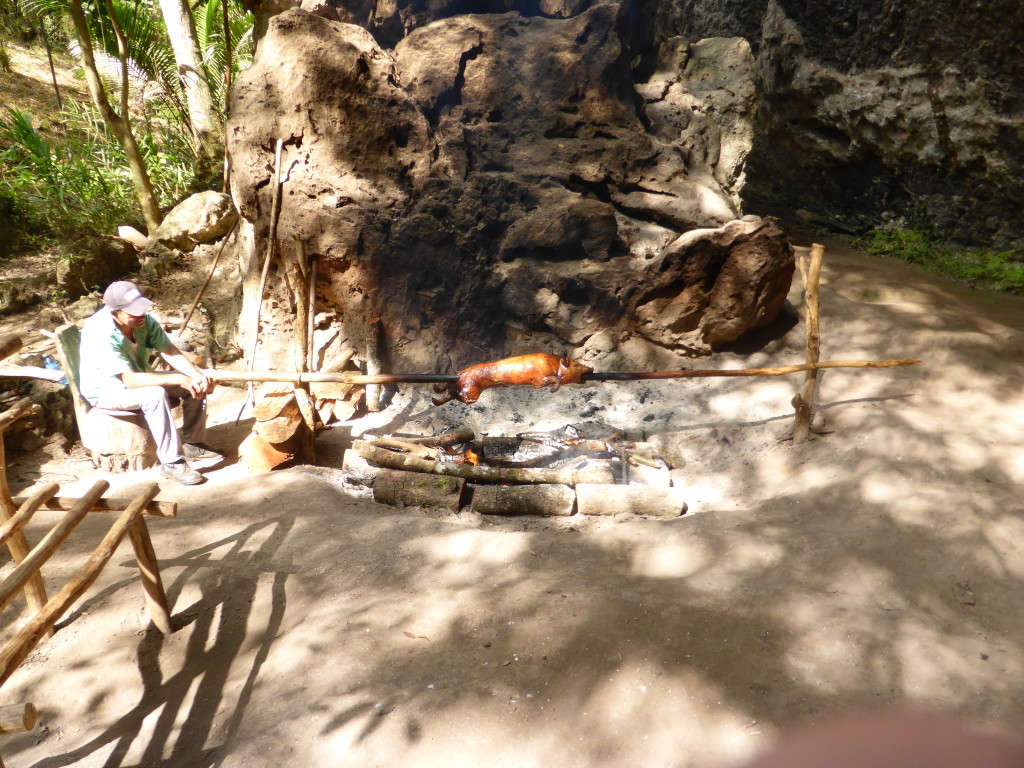 Back in the hacienda, there was a couple of hours to wait before dinner, so it was time for some more rum based drinks! Dinner came and the pig was served with congris – a dish of rice and beans. It was delicious! It is fair to say that I went to bed that night on a very full stomach! 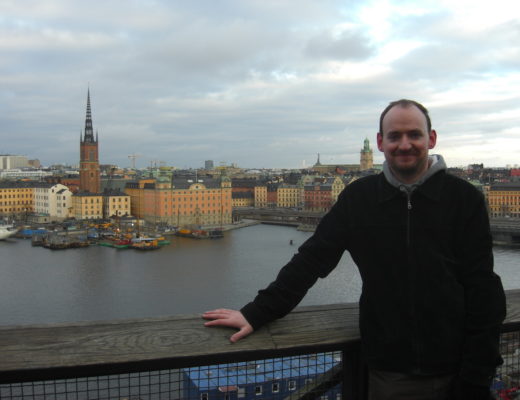 New Years Eve in Stockholm: Blast from the Past 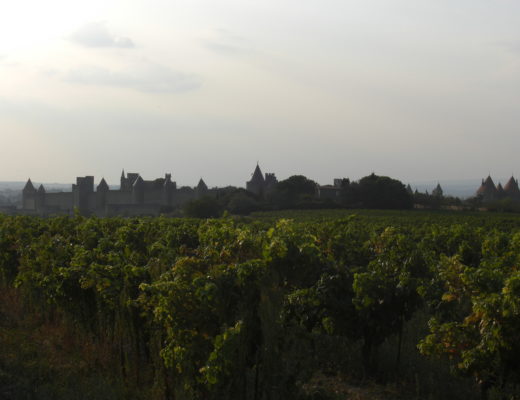 Languedoc-Roussillon: Blast from the Past 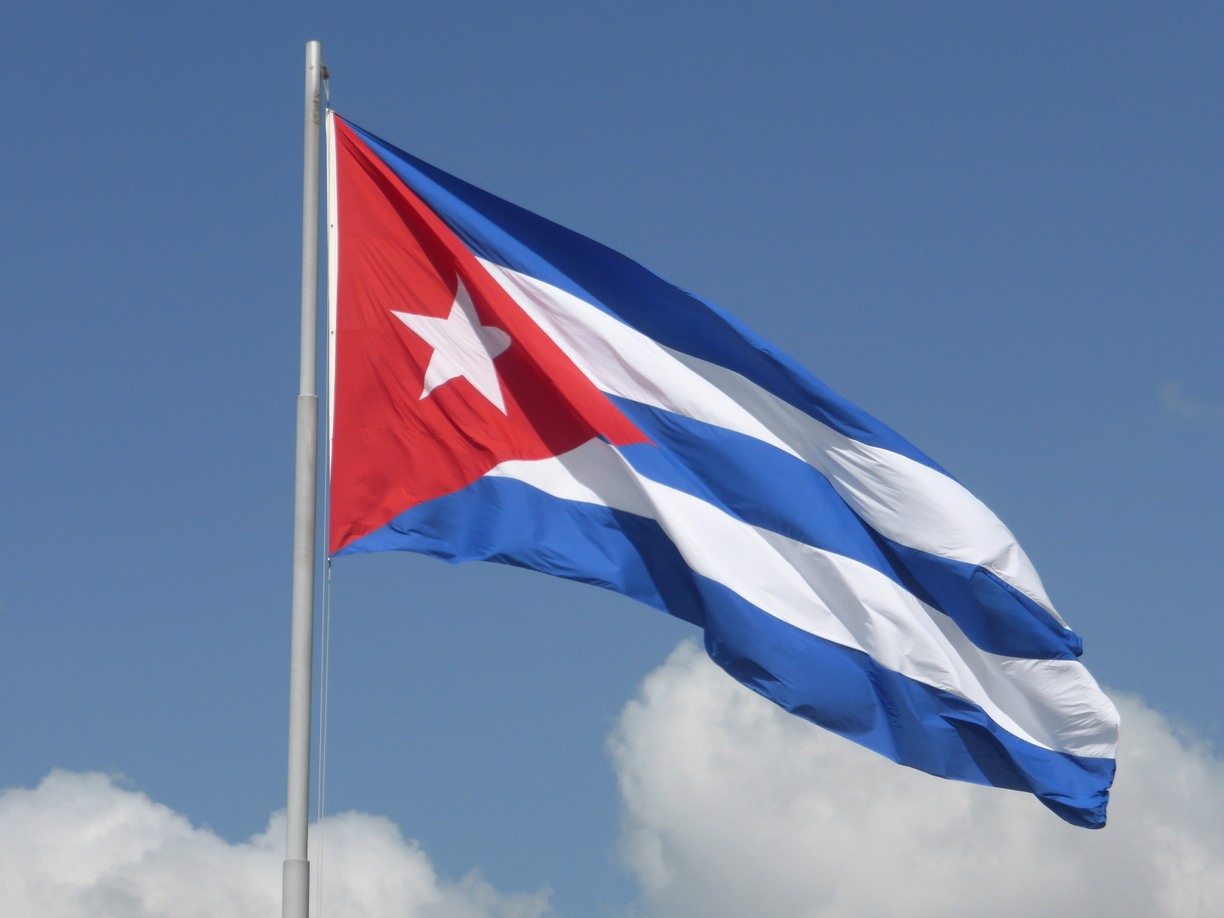 21 Photos That Will Make You Want To Go To Cuba